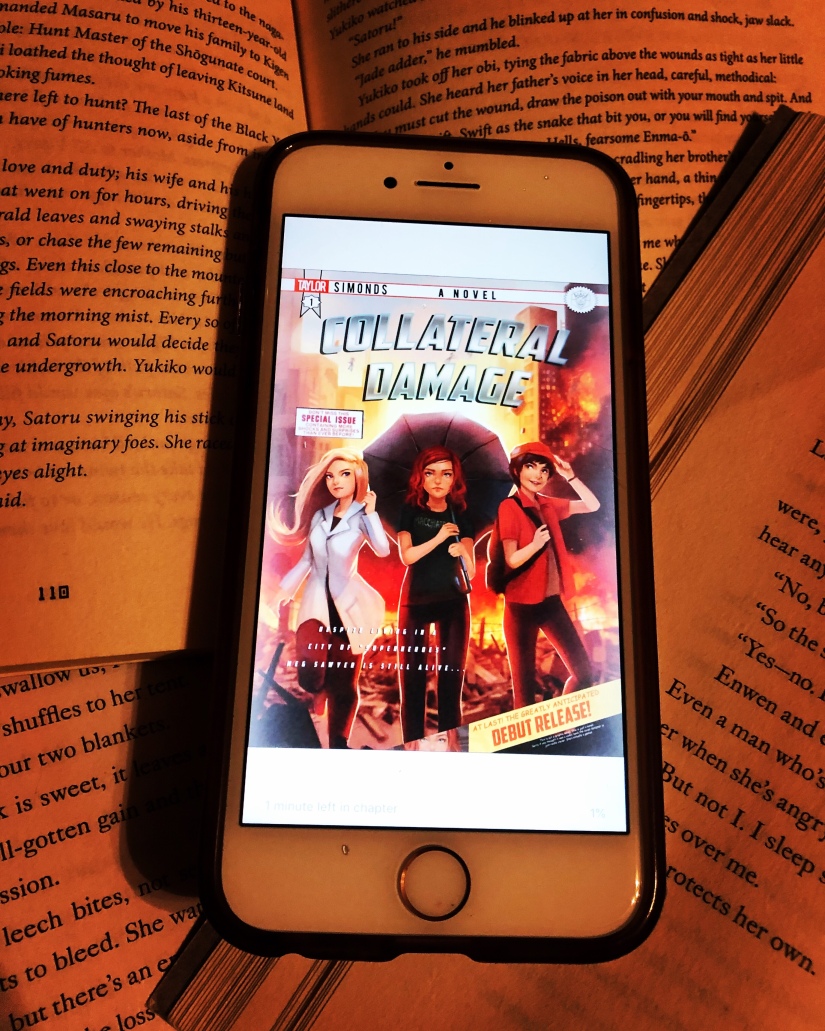 Power. Courage. Invincibility. The marks of a true hero.

Meg Sawyer has none of these things.

Meg has never stopped a moving bus with her bare hands, been bitten by a radioactive insect, or done anything moderately resembling saving the world. She doesn’t have to. She’s a background citizen, a nobody, one of the swarms of faceless civilians of Lunar City–where genetically enhanced superhumans straight out of the comics have thwarted evil for years.

For as long as the Supers have existed, Meg has had one goal: to not become a casualty in their near-daily battles for justice. And for the last seventeen years, she’s managed to do just that. Sure, her minimum-wage job at the local coffee shop isn’t great, she can’t even leave her apartment without loading herself up with protective gear, and her car was just hijacked to throw at a supervillain (again), but she’s not dead yet.

But when Meg accidentally finds one of the city’s perfect, invincible protectors murdered under extremely suspicious circumstances, her whole “innocent bystander” strategy falls apart. After being coerced by his determined girlfriend into a mission to help prevent the deaths of the remaining Supers, Meg finds herself forced into the foreground of a story she never wanted to be part of—one that challenges everything she thought she knew about both her city and herself.

Pick up your copy today 🙂

A: I don’t know if two books is enough to supply a scientifically justifiable pattern, but pretending it is, here’s the process:

1) A book premise and ending drop themselves into my head fully formed. I know who my characters are and where they’re going and I have no idea how they’re going to get there.

2) I pants. I write without an outline. It is bad. “The first draft is telling the story to yourself!” I scream at myself as I write many, many bad words that I know I will delete later.

3) Somewhere around the 40,000-word mark, I realize that I have made a crucial error in developing one of my lead characters. That personality isn’t right at all. I have to fix it. Wait, I need to change the opening scene to match the characterization I actually want them to have. Wait, none of these characters are right. This worldbuilding is so half-baked. This would make a much better inciting incident. What am I doing?

4) I move all 40,000 words to a file labeled “WIP Dumping Grounds” and start over from scratch.

5) I do this three more times until I have 40,000 words I don’t hate and then I finish the book, still screaming.

A: I have to know who my characters are before I start writing, or the story will never get written—I’m the world’s worst pantser, so all I ever know going into a book is who my book is about and where they’re trying to get to. For COLLATERAL DAMAGE I had a set of references for each character to use as a template for if I got stuck (Meg was Mia Thermopolis x Veronica Sawyer x Darcy Lewis x Haruhi Fujioka, for example, mixed with a few friends I know in real life). I feel like if I can understand my characters on as many levels as possible—what they want, what they fear, what they’re trying to accomplish, who or what raised them, how they connect to others, how they talk and move—they’ll become as familiar to me as real people. And if I let them act like real people, they’ll naturally make choices that create the plot.

A: Yes! COLLATERAL DAMAGE is a play on the superhero genre, which I’m a huge fan of, so there are Easter eggs and references all over the place. No real names or exact details are used, of course, but they’re clear enough for a potential fellow nerd to be like “Wait, this feels like Spider-Man. That’s a Flash joke. That thing covered in gemstones they just walked past in the vault is totally the Infinity Gauntlet.” Stuff like that.

A: I prefer each book to stand on its own! One of my favorite concepts is “leave the reader wanting more, not needing more.” I’m an advocate for letting books work on their own as a self-contained unit; I don’t like it when a story ends with all of its ends still loose. I shouldn’t have to buy another book to know how the first book’s conflict wraps up! I think of it as a TV series—you know how each season typically has a central theme, antagonist, character arc, collection of new characters, etc.? By the end of the season, almost everything that has been presented should have reached a conclusion—but then the last episode will hit you with a tease that there’s more to come, like the camera shift to the looming Upside-Down after the school dance scene at the end of Stranger Things. I prefer books in a series to work in the same way—when a reader picks up a book, they’re being invited on a journey, and it’s unfair to the reader to cut that journey short. Without giving anything away from the end of COLLATERAL DAMAGE, there is definitely room for a sequel eventually because it’s superheroes, but I don’t think anyone would feel confused or infuriated if this was the only book in this world that ever got written. I like to put bows on things!

– Go to @theparliamentpress and click on the link in their bio to enter.

Rules:
-No giveaway accounts
-Must be 18 + or have parents consent

-Must be able to provide an email for the E-Book

This giveaway is in no way affiliated with Instagram or any other company.