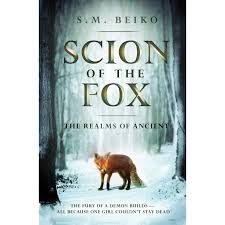 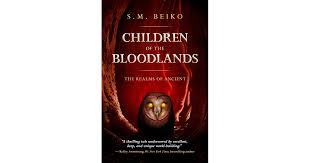 As the winter ice begins to thaw, the fury of a demon builds ― all because one girl couldn’t stay dead . . .

Roan Harken considers herself a typical high school student ― dead parents, an infected eyeball, and living in the house of her estranged, currently comatose grandmother (well, maybe not so typical) — but she’s uncovering the depth of the secrets her family left behind. Saved from the grasp of Death itself by a powerful fox spirit named Sil, Roan must harness mysterious ancient power . . . and quickly. A snake-monster called Zabor lies in wait in the bed of the frozen Assiniboine River, hungry for the sacrifice of spirit-blood in exchange for keeping the flood waters at bay. Thrust onto an ancient battlefield, Roan soon realizes that to maintain the balance of the world, she will have to sacrifice more than her life in order to take her place as Scion of the Fox.

American Gods meets Princess Mononoke in this powerful first installment of a trilogy sure to capture readers’ imaginations everywhere.

Welcome, S.M. We are so happy to have you here! Congratulations on your latest release, CHILDREN OF THE BLOODLANDS 🙂 Let’s dive into some questions.

Loie: I love Roan. I love her personality, her cleverness, and her spunk. Did you have an initial idea about Roan? Did you learn more about her during drafting?

S.M. Beiko: Roan was really interesting to write, especially because her voice comes from first person perspective. Because of this, a lot of my own mannerisms and interests came through—though she’s of course much taller than me, and a bit more athletic 😉

Whenever I create any character though, I try to put myself in their shoes and their situation, and I wanted her to headstrong, the type who rushes in, a bit emotional but also practical, and level-headed enough to be reluctant about the hard choices she had to make. At first, she was a pretty simple Chosen-One hero type, but the more I wrote her, the more it came out organically that nothing was going to be that easy for her, given the circumstances she ends up in. What came out of that were evident character flaws, which I feel are very important to making a protagonist believable! Now that I’ve finished a draft of book 3, Roan has changed quite a lot from an idealistic can’t-do-wrong prototype, and I hope everyone likes where her journey ultimately has led her!

Loie: Wow, that is so interesting! I love how you learned more about her as you wrote. Her voice is so strong and that’s one of my favorite parts. She feels three-dimensional and real. I can’t wait to read the final book 🙂

Where did the story of the Fox come from?

S.M. Beiko: I live in the far west side of Winnipeg now, but I used to live more centrally, near the Assiniboine River and Wellington Crescent. In fact, a lot of Scion was planned during my frequent walks to and from work from River Heights into Wolesley. One night, walking home along the river in late winter, a fox ran in front of me on the sidewalk, threw me some wicked shade, then bounded off into the night. A wild hypothetical popped into my head—what if that fox followed me home and gave me a cool mission? A lot of my stories crop up from random questions I ask myself, and I keep asking them until suddenly a whole novel—or three of them—have formed in my head.

Loie: Yay, Canada! Love it. It’s magical when a question or idea pops into your head and the story unravels from there.

Have you always been drawn to fantasy? Are there any other genres or styles you would like to try?

S.M. Beiko: Fantasy is definitely my bread and butter, and what I was ‘raised’ on. A lot of that influence stems from magical girl animes, or Hayao Miyazaki films, as well as comics and video games like the Final Fantasy series, and films like Labyrinth, The Dark Crystal, Lord of the Rings, and hundreds of others. I love magic in all its forms, and pushing the limits of what is expected beyond the mundane. I’d like to someday try High Fantasy, where the world-building is much more extensive, or Historical Fantasy, which entails way more research and immersion.

I’m also very keen to start a comic/graphic novel (probably still in the fantasy genre!) that is a little more light-hearted than what I’ve been writing lately. Before I got into writing/book publishing, I was actually studying for a Fine Arts degree. I found the way my program was structured to be a bit stifling/confining, so I switched into Literature. As a result, art has been something I’ve ‘done on the side’ but I’ve let it go far too much. While I’m also a comics editor by trade, I’d like to hunker down and learn another dimension of comics by creating one. We’ll see!

Loie: I love magical girl animes as well ❤ Sailor Moon is still my favorite 😀 Wow! A graphic novel/comic would be fantastic.

I read that you work in the Canadian Publishing industry. Can you share a little bit about how it differs from the US? Or can you share about your experience working on the industry. What’s it like? Being on both sides?

S.M. Beiko: The general North American market is quite similar in terms of structure, but I’ve found (with a few exceptions) that fantasy, and all other Speculative Fiction genres (Sci Fi, Horror, Graphic Novels, romance, etc.) have a much livelier market in the USA than they do in Canada. The Canadian market is still quite focused on General Fiction, meaning the themes and characters take place in the modern, real-life world (often referred to as ‘Can Lit’), and as such, spec fic hasn’t thrived. I think a lot of it has to do with major publishing awards like the Giller and the Rogers Fiction Trust Prize being focused on the Can Lit experience, as well as population density; there’s just more people in the USA who are hungry for spec fic!

My experience working in the industry has been great, though. I’ve been working as a book and comic editor, as well as a packaging graphic designer and typesetter, since 2010, and at this point I’ve virtually worked in every part of the field as I’ve journeyed to full-time freelance sustainability. As a writer, my publishing education gives me insight and tempers my expectations for my own work, as well as buoying me forward when it comes to representing myself and knowing what I can ask for. It has definitely made me a much more proactive author when it comes to promoting myself, because I know how much work goes into getting a book to press, let alone making sure its visible on the shelf. The author has to take an active role in assisting the publisher rather than relying on them to do everything.

Loie: Wow. That is so cool that you’ve worked in all parts of publishing. Love it. That would really provide you with valuable insight. Thanks for sharing about the industry. I thought that might be a reason – re: larger population reading more spec fic in the US 🙂

Do you participate in National Novel Writing Month (NaNoWriMo)?

S.M. Beiko: Unfortunately I don’t. I always say I’m going to every year, but the reality is that by the time November rolls around, I’m just coming down from either handing in a manuscript or resting after book touring. However, I do try to apply the principles of NaNoWriMo to my every day writing ethic and schedule, and while I won’t be Tweeting or updating constantly about where I am on a project, I do aim to write every day in November, even if it’s not 50,000 words, or the project isn’t complete by month’s end. November 9 is my last travelling book event—a book launch for Children of the Bloodlands in Calgary—and I can’t wait to just be at home, making things, for the rest of the year!

Loie: Thank you so much, S.M.! It was so interesting to hear you talk about the Canadian Publishing industry and also where your inspiration came from ❤ I hope you have a blast on tour!

Also, for my maritime friends, check out this tour that SM and Kristen Ciccarelli will be going on. They made a beautiful banner 🙂 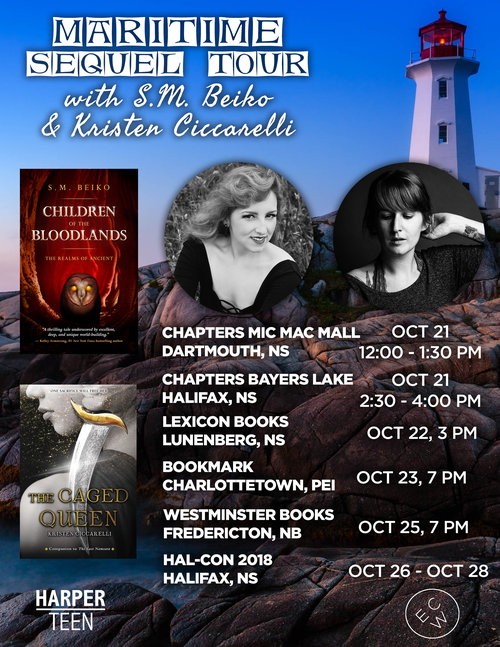 I hope you enjoyed the interview ❤ Thanks again, S.M.

Are you guys participating in NaNoWriMo this year? What are your goals? I would love to hear below ❤