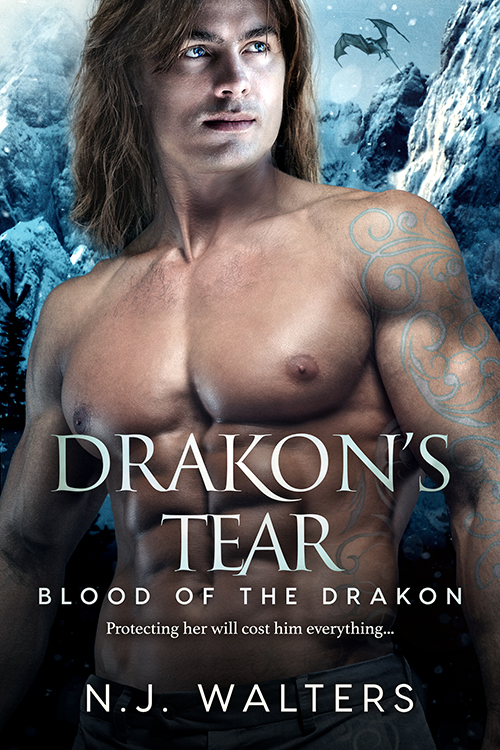 Dying isn’t an option. I’ve survived a kidnapping and now I’m on the run from the Knights of the Dragon who want my gift. I’m Abigail Owens and I can sense gemstones. There’s nothing a dragon loves more than treasure. But when I find a beautiful stone at a tiny shop in Moscow, I have no idea it’s a drakon tear, or that I’ve just put myself in the middle of a war between the Knights and a Drakon.

The only person I trust even a little is Vasili Zima, which is weird since I’m not sure if he wants to kill me or protect me. I’m drawn to him in a way I hadn’t thought possible, and he feels the same way, or he wouldn’t be risking his life to help me. He’s wanted by the bad guys just as much as I am, and staying with me, well, there’s a hundred percent chance I’m about to get us both killed. But I will not be going down without a fight.

It seemed crazy to be considering such a thing, but deep in her heart Abigail knew it was the truth. Vasili was a drakon. She had no idea why he could touch the bracelet and not be trapped by it. Or maybe he was. Maybe she was the trap.

Horror snaked through her. Was that the reason he was kissing her, touching her? Was it because of the curse or spell or whatever it was. She stared at his broad back, wondering how to address the subject. He obviously didn’t want to talk, but this was far too important to ignore.

Vasili tensed and slowly turned around so he was facing her. The frown on his face would have scared her if she didn’t know him. Come to think of it, it did scare her. A little. Okay, a lot, but she wasn’t about to back down.

“What do you mean?” He set his mug back down on the tray, but stayed away from her.

Abigail shrugged and looked at the bracelet. It seemed so harmless. If the silver were cleaned up, it would simply look like an expensive piece of bling. But it was so much more.

“You aid it yourself,” she pointed out. “I was attracted to this.” She held up her arm. “And you were attracted to me. So what if the Knights are using me as a trap.” She swallowed heavily, her heart aching. “Maybe that’s why you’re attracted to me, why you kissed me. Maybe you don’t have a choice.”

And that part hurt more than it should. Whether Vasili kissed her again or not should be low down on her list of priorities. The most pressing ones were staying alive and getting out of the country. But somehow their kissing was at the top of the list. She hated to think that what they felt for one another was nothing more than some spell the Knights had conjured.

And it was weird to think that was even possible. Magic and spells happened in books or movies, not in real life.

Of course, most people didn’t think drakons existed outside of myths and books, but she knew differently. And she’d learned firsthand back home in Vas Vegas that magic was not only real but extremely dangerous.

The temperature in the room seemed to drop. Maybe it was her imagination, but she didn’t think so.

“What are you suggesting? That I’m so weak I’d be drawn in by some spell.”

God save her from the male ego.

“Why? Why were you drawn to the bracelet?” She lowered her voice and leaned in. “Are you one of them?”

He had to admire her discretion, even though they were seemingly alone.

“Why would you think that?” he asked. He was curious to see how her mind worked and how much she actually knew about his kind.

Frustration flashed across her face, and she crossed her arms over her chest. “Fine. You want to be all mysterious, don’t tell me.”

“Answer my question, and I’ll answer yours.” Maybe he wouldn’t tell her everything, but he’d give her some kind of answer.

She gave him a look that told him she knew he was tricking her somehow but was willing to go along.

“That tattoos for one. I’ve seen similar ones.”

On her brother-in-law, most likely. “What else?”

“You’re big and strong, and there’s something about you.” She shook her head when he started to smile. “Yeah, you don’t need your ego stroked.”

But he did, at least by her. He leaned forward and propped his forearms on his thighs and linked his hands together. It pulled the material of his sweater up, exposing his tattoos. “Don’t stop now.”

Abigail huffed in pure frustration. “Then there’s the bracelet.” She slipped her sleeve back and stared at the silver band with the embedded drakon tear. The more he saw it, the less he liked her wearing the tear from another drakon.

Abigail was his treasure.

“You were attracted to the bracelet, not me. Admit that much.”

Vasili nodded. “I did sense the bracelet, but once I saw you, it no longer mattered.

“Yeah, right.” She pulled her sleeve back down. “You wanted to know where it came from, how I got it, and if I was working for a certain group who shall remain nameless.”

“You’re right. I did want to know all of that and more.” Once he’d seen her, he’d wanted to know everything about her. That had concerned him at first, but now that he knew her better, he was coming to realize just how special she was.

“What I can’t figure out is, if the bracelet is a trap…” She looked to him for confirmation.

“It is,” he assured her. Even now, there was no denying the pulsing power coming from her wrist.

“Then why doesn’t it affect you?”

Vasili knew he was at a crossroad. He’d always had a sense about such things. This moment and what he said would affect the rest of his life. He knew if he didn’t share something with Abigail, she would leave him as soon as possible. If he couldn’t build some kind of trust between them, he would lose her.

His dragon roared inside him, and the skin on his forearms rippled. He desperately wanted to shift and barely managed to control himself.

Abigail gasped and sat back on the bunk. She glanced at the door of the cabin, but it was closed, giving them privacy. She wasn’t afraid of him. Not his Abigail. She was afraid for him.

That stung. He was a drakon, mighty and powerful. She should trust him to take care of her, should recognize his strength.

He knew he was being totally irrational. That, too, was out of character. What was it about Abigail that pulled at all of his senses?

Once upon a time N.J. had the idea that she would like to quit her job at the bookstore, sell everything she owned, leave her hometown, and write romance novels in a place where no one knew her. And she did. Two years later, she went back to the bookstore and her hometown and settled in for another seven years.

N.J. Walters is a New York Times and USA Today bestselling author who has always been a voracious reader, and now she spends her days writing novels of her own. Vampires, werewolves, dragons, time-travelers, seductive handymen, and next-door neighbors with smoldering good look will vie for her attention. It’s a tough life, but someone’s got to live it.